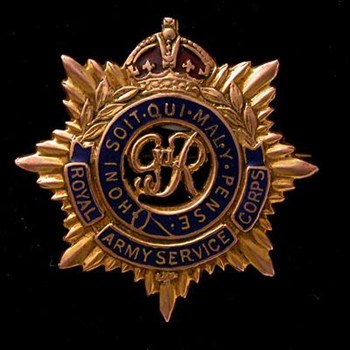 THE ROLE OF THE RASC.
Military Training Pamphlet No23 Part 1.

The role of the Royal Army Service Corps in the field falls into two main parts, supply and transport.
Supply.
Supply embraces the provision of food, petrol and lubricants, fuel and light, hospital supplies and disinfectants.
Transport.
Transport is concerned with the conveyance of the above supplies, together with ammunition, engineer stores, ordnance stores and post, from railhead, or from base if no railhead exists, to all units of a field force.

In addition RASC units are provided for the carriage of infantry, tanks and heavy bridging equipment. The mechanical transport of medical and certain other units is also found and operated by the RASC.

To enable these services to be undertaken effectively, the RASC are responsible for the provision, repair, and maintenance of their own mechanical transport.

Personnel of the RASC are trained to fight as infantry and RASC units are responsible for their own local defence.


DIVISIONAL RASC
The role of the RASC companies was to keep the front line units supplied. In order to do this there were three different operations which were carried on simultaneously.

By the end of the campaign it was usual to have a company assigned to supplies, another to petrol and a third to ammunition. Early in the campaign it was more usual to have companies serving brigades and have those companies each assign a platoon to supplies, petrol and ammunition. Cleary the brigade company allowed the brigade to operate independently and was well suited to the rapid advances of armoured divisions. In the large, and often fairly static, armies of the winter of 1944/45 during the Second World War, the commodity company was more efficient. The supply system was overhauled in the autumn of 1944 when it became common for transport from army level to deliver to division refilling points and thus cut out a stage of loading and unloading.

The transport of supplies.
The transport was divided into two echelons which operated a two day turn around system. The major item was rations. These were fairly constant and were delivered daily. Because there were slight variations in the strength of units from day to day each unit had to make a ration return stating how many rations would be required in four days time. There was always a days rations with the unit, a days rations on the second line transport and a third days rations on the third line transport so that the rations being requested today would leave railhead tomorrow.

- Supplies would be delivered to the divisional refilling point by corps transport units.

- Empty lorries would travel in convoy to the divisional supply refilling point and collect supplies. The lorries from each brigade would load the supplies for their own brigade.

- Loaded lorries would travel, preferably by a different route to avoid congestion, from the divisional refilling point to the unit supply points where units first line transport would collect the supplies. There would usually be a rendezvous point where the lorries for each brigade were met by motorcyclists who guided them to the supply point which might have moved or might be difficult to find in the dark.

- Once unloaded the supply lorries would collect any salvage in the form of returnable crates, cans, sacks etc. and then return.

- Somewhere on the return route was a reporting centre manned by the echelon commander and personnel and vehicles from company headquarters. Here the section and platoon commanders would report that their mission was complete. Here they could also get refreshment and repairs before returning to a company headquarters for rest and a meal.

- Company Headquarters would be sited close to the divisional refilling point and clerks would be provided to check the items being loaded by relief crews. Clerks and loaders would also be provided by the third line transport to handle items being unloaded. Supply Platoons were also available to assist with supply matters.

- Supplies of petrol were delivered to the divisional petrol refilling point by corps transport where it was held on wheels until collected by the divisional transport as required. The corps RASC held a reserve sufficient to move the entire division 25miles.

- Forward of the divisional refilling point was a holding point where the second line transport held a reserve on wheels sufficient to move the entire division 50 miles. Second line vehicles also ran a shuttle service from the holding point to unit supply points so that petrol was always available when required.

- On return journeys lorries should carry salvage in the form of empty jerricans. All petrol was in cans and a 3ton lorry could carry 160 jerricans.

- There was less need of clerks, although deliveries were monitored so that fresh supplies could be ordered.

- Forward of the divisional refilling point was a holding point where the second line transport held a reserve on wheels. Second line vehicles ran a shuttle service from the holding point to unit supply points where ammunition was always available.

- On return journeys lorries should carry salvage in the form of empty ammunition boxes and cases, packing tubes, and shells that have been unpacked but not used. This latter made it necessary for lorries returning to the divisional filling point to be diverted to a salvage depot where returned ammunition could be handled by RAOC personnel.

- A General Duties platoon was available to assist with loading and unloading ammunition.

- It was a principle of ammunition supply that it should move forward automatically and need not be indented for. Clerks were required to record amounts issued, and units made returns of ammunition expenditure, so that replacement stocks could be provided.

- At times of heavy artillery ammunition expenditure divisional lorries could deliver direct to gun lines and dump ammunition on the ground.


Note: The term railhead can also cover Beachhead and or Airhead.

The system was sufficiently flexible to cope with rapid movements. When fighting units advanced many miles a day the supply system was able to maintain a steady flow. In the advance petrol was essential and the supply was ensured by

- by units transport carrying a refill,

- by the RASC company reserve on wheels moving just behind the units,

The Royal Army Service Corps (RASC) was a corps of the British Army. It was responsible for land, coastal and lake transport; air despatch; supply of food, water, fuel, and general domestic stores such as clothing, furniture  and stationery (but not ammunition  and military and technical equipment, which were the responsibility of the Royal Army Ordnance Corps); administration of barracks; the Army Fire Service; and provision of staff clerks to headquarters units.
Added on 15/04/2010

The Royal Army Service Corps (RASC) was a corps of the British Army. It was responsible for land, coastal and lake transport; air despatch; supply of food, water, fuel, and general domestic stores such as clothing, furniture  and stationery (but not ammunition  and military and technical equipment, which were the responsibility of the Royal Army Ordnance Corps); administration of barracks; the Army Fire Service; and provision of staff clerks to headquarters units.