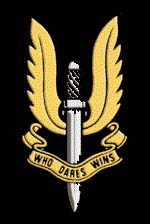 The Special Air Service (SAS) is a special forces regiment within the British Army which has served as the model and inspiration for other countries. The SAS forms a significant section of United Kingdom Special Forces alongside the Special Boat Service (SBS), Special Reconnaissance Regiment (SRR), and the Special Forces Support Group (SFSG).

The Regiment is a Corps of the British Army under the United Kingdom legal system which authorises the raising of military forces and comprises three battalion-sized units, one Regular and two Territorial Army (TA), each styled as ’regiments’ in accordance with British Army practice; 22 SAS Regiment being the Regular unit, with 21 SAS Regiment (Artists Rifles) and 23 SAS Regiment as the TA reserve units, known together as the Special Air Service (Reserve) or SAS(R).

23 SAS - to provide depth to the UKSF group through the provision of Individual and collective augmentation to the regular component of UKSF and standalone elements up to task group (Regimental) level focused on support and influence (S & I) operations to assist conflict stabilisation.

The traditional role of 21 and 23 SAS is to carry out long range reconnaissance patrols for the regular UK Army (although these days the focus is on augmenting UKSF operations), freeing the regular SAS from recon tasks and onto direct actions. 23 SAS had previously been trained for combat search and rescue (CSAR) although it’s now reported that role has been given to dedicated RAF Regiment units.

In 2003, it was reported that 21 and 23 SAS had been operating in Afghanistan where they have carried out long range reconnaissance operations.

Another role that SAS reservists are thought to carry out is that of so-called ’hearts and minds’ operations. On such missions the SAS give medical and other assistance to local forces and populations in a given theatre. It is thought that 21 and 23 SAS work closely with the 15(UK) Psychological Operations Group, part of the Intelligence Corps, when undertaking hearts and minds ops.

The men of 21 and 23 SAS are issued with standard UK infantry weapons, typically the SA80 and variants.