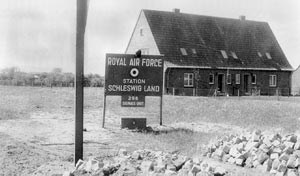 Between November 1947 and 12th June 1948 RAF Schleswigland served as the northern post in the Berlin Airbridge campaign conducted by the allies. Up to 32 four-engined heavy aircraft operated from the airfield during this period.

The Berlin Airbridge lasted for 462 days, being the largest humanitarian air transport task in history. When the operations began on June 26, 1948, probably nobody thought that by the end 2.3 million tons of supplies would have been transported into a Berlin that had been cut off by the Soviets. Finally the Russians gave up the blockade. On 12 May, the first trucks and freight trains rolled again into the city, on many of them was written: "Hurrah, we are still alive!"

In autumn 1948 the forces in Northern Germany were being reorganized, and a Norwegian brigade (482nd) from Harzen moved to Schleswig-Holstein. On 11th of April 1953 the Norwegian contingent held their closing parade on RAF Schleswigland Airfield after completing exercise VIKING II with the Danish Brigade.

The very last RAF units left RAF Schleswigland in 1958, when the airfield was handed over to the newly founded Marineflieger (MFG). Ironically, the last British aircraft to leave Schleswig-Jagel were the deHavilland Mosquitos - the former direct opponent of the last German aircraft operating at Schleswig-Jagel, the Heinkel He-219.