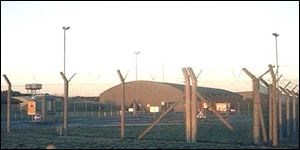 A Royal Air Force base, RAF Edzell is situated four miles (7 km) from Edzell by road, but only one mile (1.5 km) directly east, over the North Esk. It was active for over fifty years, first as a RAF base during World War II, and later on lease to the United States Navy, until its decommissioning in 1996. Its stock of 150 houses were sold off in 1999 to become a new, independent village called Edzell Woods