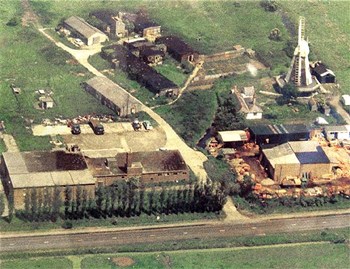 RAF Sandwich was a WW2 GCI radar station located in Sandwich, Kent.
After the war a new underground R3 bunker was built as part of the
ROTOR programme.  This was on a new site at Ash but the station
retained the name RAF Sandwich until closure in 1958.

During the 1970’s the site was used by the CAA for civil radar as part
of the Linesman/Mediator programme but was reacquired by the MOD in
1981 for IUKADGE. It was intended that the station would be one of
four control and reporting centres, the others being at Buchan,
Boulmer & Neatishead. Once rebuilt as an R3A the station was renamed
RAF Ash but it never fulfilled its intended function as an SOC and no
radars were ever installed. RAF Ash was decommissioned in 1997 and
sold to AL Digital in 1998 for use as a secure data centre. The site
is now marketed as ’The Bunker’

This report has been prepared without the co-operation of anyone from
’The Bunker’ (I did ask) and therefore has few underground pictures or
current pictures of the Ash site.

The WW2 GCI station (Happidrome) however still exists as does the IFF
plinth for the ROTOR station (on the site of the remote Type 7 radar)
and much of the domestic camp. The photographs therefore concentrate
on those sites that can be visited and I make no apology for providing
a very full photographic survey of the domestic camp - it’s very much
a part of the RAF Sandwich story.