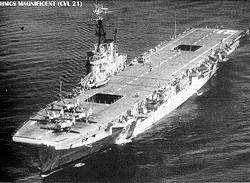 HMCS Magnificent (CVL 21) was a Majestic class light aircraft carrier that served the Royal Canadian Navy from 1946–1956.  The third ship of the Majestic class, Magnificent was built by Harland and Wolff, laid down 29 July 1943 and launched 16 November 1944. Purchased from the Royal Navy (RN) to replace HMCS Warrior, she served in a variety of roles, operating both fixed and rotary-wing aircraft. She was generally referred to as the Maggie. Her aircraft complement included Fairey Fireflies and Hawker Sea Furies. Complement: 1100 (including air group)

On March 20, 1949, while on fleet manoeuvres in the Caribbean, thirty-two aircraft handlers on the Magnificent briefly refused an order to turn to morning cleaning stations to protest various grievances.

Her last role was as a transport during the Suez Crisis, carrying a large part of the Canadian peacekeeping force to Egypt, its vehicles parked on her deck.

HMCS Magnificent was decommissioned by the RCN in 1956 and was returned to the RN in 1957 and placed in reserve.