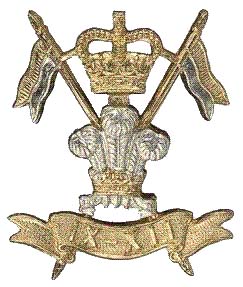 Shortly after, the regiment moved to Northern Ireland where both parent regiments had begun almost 250 years before.

The regiment has a long and illustrious list of battle honours including World War I and World War II. In more recent times, B Squadron were the first armoured reconnaissance squadron to deploy to Bosnia when the hostilities began. It seems only fitting then, that they were also the last armoured reconnaissance squadron to leave Bosnia in October of 2003.

In 2005 the regiment serves in the formation reconnaissance role with 1st UK Armoured Division. They are, however, currently the Reconnaissance regiment for 7th Armoured Brigade (The Desert Rats) for deployment on operations in Iraq until mid 2006.

The regiment uses the CVR(T) family of vehicles in its role, with each of its three fighting squadrons holding a number of each variant.

remember being fired at by a Turkish tank whilst doing a patrol around the big communication base in Cyprus, we were in a ferret scout car, i reported the contact and was told to get the hell out of it, told my driver Fred Frost to high reverse not realising Jonathan Dimbley had parked his mini bus right behind us, did`nt even have to fill an accident form in after wrecking his bus

Most disappointing memory was being disqualified for hitting with the inside of the glove, on Moy Day 1949 at Barnard Castle! Not a good decision as I boxed for 2 years under Len Bynon, a professional boxer in Wales, and carried out many exhibition bouts before boxing for the Army. Someone must have had a bet on me losing!!

Joined in Jan59. Bovington Camp. Attended the amalgamation parade of the 9th and 12th Royal Lancers in Tidworth with Sgt Joe Peacock 12th Lancer
Joined A Sqdn 9/12th Omagh N-Ireland Jan 62 then Castle Archdale
Sailed on the TTS Oxfordshire from Southampton to Aden. 1st Troop A Sqdn. Troop posted to Dhala New Year 63.
BOAR Osnabruck 63-65 1st Troop A,Sqdn.
65-67 attached to the Leicester & Derbyshire Yeomanry (Derby) asCpl. instructor.
67-68 rejoined Regiment A Sqdn 1st Troop Osnabruck.
March 68 - Jan 71 Joint Services Recruitment office Leicester. Lived in Drill Hall House Loughborough. Terminated Colour Service. 1,1,72
I had many jobs since my "Demob" Employment Dept Civil Service. Manpower, Tool company, lace company but for over 30 years engaged in the works contracting industry Aerospace and ship industry. The last 25 years as self employed (own companies). Due to medical circumstances I have had over the last 15 years to restrict my physical activities until the last few months when I have had to stop completely.