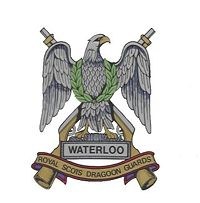 The regiment has won numerous battle honours and two Victoria Crosses, and, through the Royal Scots Greys, is the oldest surviving Cavalry Regiment of the Line in the British Army.

The regiment is currently based in Fallingbostel, British Forces Germany, as part of the 7th Armoured Brigade (’The Desert Rats’).
The regiment has deployed on three tours of Northern Ireland in 1972, 1976 and 1980., suffering one loss in 1972, when Trooper Ian Hunter Caie, aged 19, was killed by a bomb in a beer barrel that exploded in the path of his Ferret scout car in Moybane, near Crossmaglen County Armagh.

It recently operated in Iraq during the Iraq War of 2003 (Britain’s contribution being known as Operation Telic) where it took part in the advance on Iraq’s second largest city, Basra. It met sporadic resistance that included Britain’s largest tank engagement since the Second World War, when 14 Challenger 2 tanks from C Squadron, engaged and destroyed 14 Iraqi tanks (the so-called ’14-0’ engagement). Together with Warriors of the Irish Guards, the regiment entered Basra on 6 April, and left Iraq shortly after the war was officially declared over on 1 May.