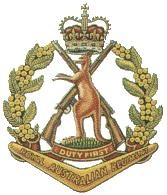 Origins of the regiment can be traced back to 1945 when the 65th, 66th and 67th battalions were raised in the Second Australian Imperial Force to assist Britain during the confict with Japan. In 1948, it became known as the Australian Regiment and in July 1949, it was awarded with the ’Royal’ acolade.

The regiment has served in the Korean War, the Vietnam War, Somalia, Iraq and Afghanistan. It currenlty consists of eight battalions.

My greatest memory is carrying out my very first Parachute descent from a Dakota aircraft in Aug 1964
Going to Vietnam with A Coy 1 RAR in 1965/66 at Bien Hoa airbase with the 173d Airborne Brigade
Serving with all my buddies in Malaya with 8 RAR at Terendak Garrison from 1967/69, where I also parachuted with the Commonwealth Free Fall Club.
Becoming a Parachute Jump Instructor at the Parachute Training School at RAAF Williamtown NSW in 1971, then being part of an elite group of Instructors.
Being one of the Original members of the Army Parachute Free Fall team, originaly called "The Dominoes" then becoming "The Red Berets Free Fall team"