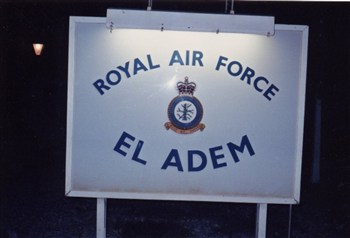 On live firing detachment with No 1(F)Sqdn. Living in a series of huts behind the control tour. Nothing to do on a Saturday afternoon so go tortoise hunting with one of the married blokes who wants one to take home to his kids.After about 40 minutes of fruitless searching watching the Land Rover come scorching across the bondhu and skidding to a halt beside us. The driver gruffly asking what we were doing and when we had told him being told to get in the Rover as an arab and his donkey were blown up out here last month by a 2nd world war mine. Cripes, get me out of here.

I was stationed at RAF Uxbridge and just after Christmas, Dave Fieldsend and I were told that out emergency standby was upgraded. We were not allowed out of Uxbridge at all. We could go into the town but we had to be specific about where we would be. The reason for this was the revolution in Libya. Colonel Gadaffi had seized power from King Idris and had told the British and American troops to leave the country. On the first of January we were given rail warrants and told to report at RAF Fairford on the third. We were also given permission to phone home about our destination.
I found the whole thing exciting and was full of enthusiasm, like an idiot I expected my mother to feel the same. She had seen the trouble on the news, then I phone up and say, "Hi Mum, I'm going to Libya on Tuesday." She of course didn't like the idea and became very upset. Luckily our neighbours were there and they managed to cheer her up a bit.
When we arrived at Fairford, we were told that we were going to RAF El Adem to assist with the withdrawal from Libya. There were forty of fifty of us, mainly MT, stores, clerks, cooks and trade assistants. We would not be operating as a separate unit, but were to be absorbed into the base to provide the extra labour that was needed for the withdrawal.
We were up early the next morning, had our breakfast, then walked over to our aircraft, a Hercules Transport Plane. We boarded through the loading ramp at the rear and were strapped in long canvas seats that went round the sides of the plane, like a long continuos bench, with our backs to the side of the plane. We couldn't see the men on the other side because of the mountain of cargo crates stacked down the middle. The ramp at the back was raised and we taxied out to the runway. The four huge propellers started spinning at full power and off we went. Taking off was not as bad as I thought it would be, but it was a pity that there was no windows to look out of. The flight itself was a long drag. We were in the air for ten hours with nothing to do but chat or try to sleep through the noise. There was a generator or pump up on the ceiling and every now and then it would start up making a loud whining noise, which startled everybody the first few times. I did manage to get to sleep but the stupid steward woke me to see if I wanted a cup of orange and a cheese sandwich. I didn't manage to get back to sleep after that. We were flying slower and lower than jets so at times it was a bit of a rough ride. More like being in a boat than a plane. We all got to spend a bit of time in the cockpit, which was great but it was only for about ten minutes, and all that I could see below was clouds.
We arrived early evening at RAF Akrotiri, Cyprus. Why? We didn't know. It was further away from England than Libya was, but they must have had good reason, though they didn't tell us what it was. We were to stay overnight then fly to Libya the next morning. We went to the transit block, then to the mess for dinner, and then out for a few beers. Great, a week ago I was sitting in a pub in Uxbridge freezing cold, now here I am with no coat on, drinking on a Mediterranean island.
We set off late next morning. We had been told that it was only a two and a half hour flight, so we were all happy to get aboard. When we got off the plane at El Adem it was 80-85'. Not bad for the first week in January. We were given temporary accommodation in the transit huts by the airfield. They were prefab type huts made from aluminium. Just one big open room with about sixteen men to a hut. We had been allocated three of the huts. The hut that I was in already had a solitary occupant, a gunner from the Royal Artillery. All the other huts were occupied with the men from The Third Battalion Parachute Regiment, who had arrived some time before us. So here I was, at last, a Moonie.

I did convoy work from the ammunition compound down to the waiting ships at Tobruk Harbour. I remember the Empire Gull was one of the ships, but I can’t recall the names of the others. One particular evening I was booked on the convoy with Kevin, an MT drinking mate. We arranged to offload and then park at the dock and go into the garrison bar for a drink before heading back. There were about eight in the convoy, with the leader, a corporal, on the front towing a giant generator. We left El Adem and made our way along the old road towards the dual carriageway. We were travelling slow because the road was not that good, but we would soon be on the new carriageway so we would just have time to catch the bar. We turned left onto the carriageway, but still continued our journey at 15-20mph. I kept checking my watch, this could take far too long at this rate. I was thinking about pulling out and making a dash for the harbour, but knew the corporal would not be too pleased if I did. Then I heard a hooter blast and a Bedford came hurtling past driven by Kevin. That’ll do I thought, and I pulled out and followed him. We were soon at the dock, the Engineers unloaded us in no time and we were in the garrison bar before the rest of the convoy arrived. There was an almighty fuss when we got back to El Adem, but fortunately no charges.
We were sitting in the RAF rest room at the MT yard wondering how to spend our break when someone suggested a game of cards. I walked along the corridor to the RCT restroom and walked in. Unfortunately the R.C.T. sergeant was giving the drivers some kind of briefing "What the hell do you want?" he asked. "I just wanted to borrow a pack of cards," I replied. The R.C.T. sergeant yelled at the top of his voice. "THIS, IS AN R.C.T. REST ROOM, NOT A F****** CASINO. GET OUT". There were big grins on the army lad’s faces as I hastily departed.

Sitting by the swimming pool with Matt , Taff Hamm and Rob Hawkes watching 17/21 advance party get of the aircraft and collapse in the heat.