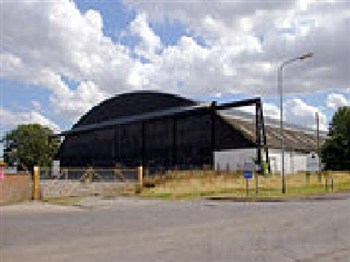 RAF Elsham Wolds is a former Royal Air Force station in England, operating in both World War I and World War II. It is located just to the north east of the village of Elsham in north Lincolnshire.

An airfield was established at Elsham as early as December 1916 and used by C Flight of 33 squadron of the Royal Flying Corps, initially operating F.E.2 and later Avro 504 and Bristol F.2 Fighter biplanes. From June 1918 to June 1919 it was also the squadron’s headquarters, taking over from Gainsborough.

The site was the most northerly of three airfields, along with RAF Kirton in Lindsey (B Flight) and RAF Scampton (A Flight), equally spaced between the cities of Hull and Lincoln for countering Zeppelin night raids. C Flight also acted as observers for the artillery batteries located at Spurn Head and Kilnsea.

The flight stayed at Elsham until June 1918, the wooden huts and a small aircraft shed that had been erected were demolished by 1919 when the station was abandoned back to agriculture at the end of World War I.

In the late 1930s with a new war on the horizon, there was once again the need for extra airfields to accommodate an expansion of the RAF. Former World War I stations were surveyed for suitability, and in Elsham’s case an area just to the west of the original site was deemed to be more satisfactory.

Work began in the winter of 1939-1940, but due to the decision to the complete the building of hard runways before the station opened with the arrival in July 1941 of 103 Squadron.

The station was equipped with a main runway 2,000 yards long and 2 subsidiaries of 1,600 yards and 1,400 yards. Three hangars were built - two T-2’s, one J-Type and 27 aircraft hardstands, later increased to 36. Three more T-2 hangars were build in 1944. Accommodation was provided for around 2,500 personnel and dispersed in the nearby farmland.

No. 103 is credited with more operational sorties than any other No. 1 Group squadron but consequently it suffered the group’s highest losses and of the 248 bombers lost on operations while flying from Elsham Wolds, 198 were from No. 103 Squadron. Of the 248 total, 28 comprised Vickers Wellingtons, 12 Halifaxes and 208 Lancasters. One Elsham Wolds Lancaster, ED888, which served with both Nos. 103 and 576, held the Bomber Command record for operational sorties having completed 140 between May 1943 and December 1944