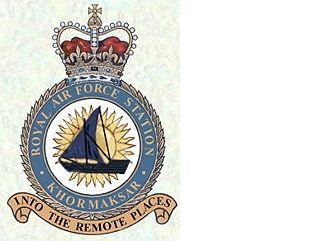 Originally used in 1917 by the RAF it was enlarged in 1945 as the British were spreading their influence deeper into the Arabian Peninsula. In 1958 a state of emergency was declared in Aden as Yemeni forces occupied nearby Jebel Jehaf and RAF squadrons were involved in action in support of the British Army. In the 1960s during operations around Rhadfan the station was the busiest ever RAF station. It was overcrowded and the station also attracted terrorist ground attacks. In 1966 the newly elected Labour government in the United Kingdom announced that all forces would be withdrawn by 1968. The station closed on the 29 November 1967.

I was just eighteen when I arrived in Aden in July 1962 with a group of other suppliers fresh out of training at RAF Kirton Lindsey. We arrived on a BUA Britannia after a long flight from Stansted - a ramshackle collection of Nissen huts in those days, not the modern airport of today - and on arrival we were allotted our units. As I remember it was a quite arbitrary prodedure. Lined up on the tarmac and pointed at - "you and you, Bahrain, you, Sharjah, you, Masirah, you, Salalah," etc.,with two or three being allocated to 114 MU RAF Steamer Point, one lucky individual being directed to RAF Eastleigh in Nairobi and the fickle finger of fate marking me out for RAF Khormaksar.
After a last night spent together in the transit billet we dispersed to our designated patches of Middle Eastern sunshine. While others went by air or road, I had a couple of hundred yards walk to my new home, Block 7 Bottom North. Block 7 was a three storey edifice that ran alongside the main road from the runway to the power station.It had two wings, North and South, each containing three billets - Bottom, Middle and Top. They were light and airy rooms with half a dozen sets of doors on each side leading on to verandahs. I discovered thet some of the occupants preferred to sleep out there rather than under the ineffective fans.
I was soon made to feel at home and introduced to the various amenities. The NAAFI and the Sixty Nine Club where everybody banged the rattan chairs at least three times before sitting down - to dislodge the bed bugs! - and made mini pyramids from the empty cans of Tiger beer. The camp cinema where every advert, cartoon or mini series had it's own ritual of audience participation. Pathe News, Peter Stuyvesants 'Bridges of the World' and Looney Toons all had their own specific chant. Not even the National anthem was spared. Something to do with the Queens horse and Alfred Hitchcock if I remember correctly......!
Work in the Supply Squadron was 'air side' and you had to pass through a gate in the wire fence. First thing in the morning this was quite often monitored by the Station Warrant Officer to catch latecomers. The local Adeni who operated the tea-bar answered to the name 'Christmas', had a very rudimentary grasp of English. He was very proud of the snatch of two songs he had learned. "Sweet sweet, memories' memories you gone fishin'" was an amalgamation of them both sung as one to no recognisable tune.
Trips off the base included games of rugby with 45 Commando, the Kings Own Scottish Borderers and RAF 114 MU; shopping trips to Crater, Steamer Point and Ma'ala, and afternoons out to the Steamer Point Lido, a NAAFI facility which had a beach with shark nets. This was once the scene of a mass rumble sparked by the presence of the crew of USS Forrester, an American aircraft carrier paying a 'courtesy' visit. Fortunately this was an isolated occurrence which was soon quelled by the arrival of that ships shore patrol - a bigger, blacker and meaner group of gentlemen I've yet to encounter - who wielded their batons indiscriminately.
The 'troubles' were just surfacing in Aden at that time, so there was an element of unrest in the local population and as well as the standard guard duties performed on the base there were additional patrols carried out around the nearby area. Ma'alla, which had a lot of hirings for families, The Red Sea Hotel (Joint Services Transit hotel) and the X-Group site -X for explosives! I don't think our pick-axe handles would have been very effective against a grenade lobbed in there.....
After six months I was posted up the Gulf to RAF Bahrain (later to be re-named RAF Muharraq) where I was reunited with some of my former colleagues from training school and where I completed the rest of my tour.
There are so many more incidents, too many to relate in detail at this juncture - deja vu in Crater, caught offside in the red light district of Sheikh Othman, a week in the glasshouse at Steamer being just a few! If anyone out there has memories of Aden to share I would be delighted to hear from them - especially if accompanied by photographs.

Was there on Emergency Draft 1965 living in Red Sea Hotel before moving to the camp which was so overcrowded we slept on the balcony.I think it was block 7. Worked in the POL Depot when I was not on guard or tanker escort. Formed Pipe Band while there along with an MT guy from N. Ireland(sorry forgot your name, but was it Humphreys)with over 20 players, thanks to PSI and old instruments left behind by a Scottish Regt.in disused barracks the other side of Steamer Point. The Camel Club was always on the agenda.When I was leaving it took 4 days waiting, to catch a Britannia to Muharraq. The bar in Air Movs made a fortune even although whisky/rum was only 6d a double double.A bottle of rum and 4 large bottles of coke cost just 7/-. Those were the days!

Remembering 10 glorious days playing golf in Kenya. Upon arrival at Eastleigh, Nairobi late afternoon from Khormaksar together with the combined service’s team to play against several local club’s culminating playing the middle east service championships at the Royal Nairobi GC.
Had some difficulty at the port of entry. My small pox vaccination was out of date. I was placed in isolation pending a decision to put me back on the returning flight to Khormaksar.
A senior Army officer, one of our group intervened I was summarily escorted to the hospital sick bay, under guard, to remedy my problem.
I was allow to stay however my arm became so swollen! Golf was of secondary concern needless to say I played very "Poorly". Each time I drove the ball it was invariably very low, my East African caddy would say "Snake Ball B’wana".
If by chance any member of that team recalls that memorable visit I would really like to hear from them.

Aden Arrival August 1962 My first recollection is of the door of the Britannia opening on arrival at Aden Airways terminal airport at RAF Khormaksar, was being hit by the blast of hot air entering the cabin! We had been warned, but nothing could prepare you for that, As we stepped down from the air-conditioned comfort of the Britannia we immediately became acquainted with the sort of temperatures with which we would have to contend in Aden: although it was in the small hours the gentle breeze wafting over us felt as though it had originated from a hair drier.
Then we were led away to the transit coach transporting us to the base RAF Khormaksar, and arrived at our billet accommodation each of which held 22 beds and the usual billet furniture for the next couple of days. Arrayed in our beautiful blue pyjamas we made up our beds from the dusty sheets provided, and the lucky ones amongst us were soon asleep. The remainder, unaccustomed to such an environment, and not lulled by the gentle flapping of ceiling fans