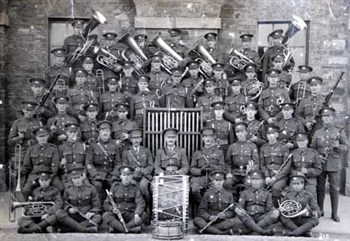 The Regiment had the unique distinction of being known as "The King’s Own" and of wearing the Lion of England as its cap badge.

Raised in the West Country on 13th July, 1680 by the Earl of Plymouth for Service in Tangiers the King’s Own became one of the oldest regiments of foot in the British Army
The Regiment was converted to Marines in 1703 and as Marines took part in the capture and subsequent long and successful defence of GIBRALTAR. They were restored to the Army in 1710. It was shortly after this that King George I fixed the titles of many of his regiments and in a Royal Warrant of July 1715 the regiment was first officially known as the King’s Own.
The King’s Own played its part in both World Wars. In the first its 16 Battalions fought in France, Greece, Gallipoli, Egypt and Mesopotamia and the total casualties suffered by the Regiment amounted to 6515 officers and men killed. It also gained for the Regiment no fewer than 8 Victoria Crosses. In the Second World War 8 Battalions were in Service in North West Europe, Italy, the Middle East and the Far East. Both regular battalions gained unique distinctions; the 1st Battalion at its classic defence of HABBANYIA to which it was flown from India thus becoming the first battalion ever to be flown into battle, and the 2nd Battalion for its attack at MERJAYUN in Syria. The 2nd Battalion were later to be flown into Burma as part of the Second CHINDIT expedition, living, marching and fighting under atrocious conditions some 150 miles behind the Japanese lines.
In August 1953 the Regiment was given the freedom of the City of Lancaster in recognition of its fine Service and in 1959 the 1st Battalion The King’s Own Royal Regiment was amalgamated with the 1st Battalion The Border Regiment to form The Kings Own Royal Border Regiment, the Headquarters and Museum of which are now in Carlisle Castle. However, the Territorial Battalion of the King’s Own based at Lancaster carried on the name of the Regiment until 1969 when that unit ceased to exist under the great reduction of the Territorial Army of that year. The Colours of this Battalion; the last Colours of the King's Own Royal Regiment to remain in use, were laid up in this Regimental Chapel in July, 1980, exactly three hundred years from the founding of the Regiment.