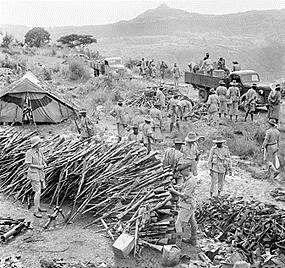 The King’s African Rifles (KAR) was a multi-battalion British colonial regiment raised from the various British possessions in East Africa from 1902 until independence in the 1960s. It performed both military and internal security functions within the East African colonies as well as external service as recorded below. Rank and file were Africans called askaris, while most officers were seconded from British Army regiments. When raised there were some Sudanese officers in the Uganda raised battalions and towards the end of British colonial rule African officers were commissioned in the various battalions.
Until independence, the parade uniform of the KAR comprised khaki drill with tall fezes and cummerbunds. These were normally red, although there were some battalion distinctions with Nyasaland units, for example, wearing black fezes.

Prior to 1914, the Regiment’s field service uniforms reflected its constabulary role and consisted of a dark blue jersey and puttees, khaki shorts and a khaki fez cover with integral foldable cloth peak and neck flap. Africans wore sandals or were barefoot. Fezzes bore an Arabic or Roman number with the wartime raised battalions wearing theirs on geometric-shaped patches of cloth. During the Great War, all the dark blue items were replaced with khaki equivalents, and a short pillbox cap with a khaki cover was worn on campaign. After the war, the khaki shirt was replaced by a collarless blue-grey angora shirt called a "greyback",
The King’s African Rifles took part in the campaigns against Sayyid Mohammed Abdullah Hassan in Somalia during the early 1900s. Hassan was known to the British as the "Mad Mullah", though he was neither mad nor a mullah. The KAR were part of the British air and ground force which successfully defeated Hassan in 1920.