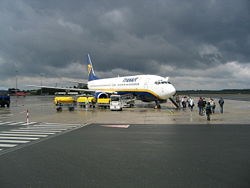 Eindhoven Airport (IATA: EIN, ICAO: EHEH) is a regional airport near Eindhoven, Netherlands. In number of served passengers it’s the second largest airport in the Netherlands, with 1,5 milion passengers in 2007 (well behind Schiphol, more than 48 millions of passengers).

The airport is used for both civilian and military traffic. From World War II up until a few years ago, Eindhoven Airport was called Welschap.

During WWII, it was extensively bombed. When construction started of the new Meerhoven district in the vicinity of the airport, many bombs were found and had to be defused.

The airfield at Eindhoven was reclaimed from the Luftwaffe on the liberation of the town of Eindhoven in September 1944 and its temporary code number was B.78.
It became R.A.F. Eindhoven soon after and became the parent Station of many detachments and outstations covering supply stores, bomb dumps and vehicles for the 2nd Tactical Air Force.
There were different detachments such as 401 A.S.P.(Air Stores Park), S.E.S., (Special Equipment Stores), 317 M.T.Squadron, (Motor Transport) also Alphen Riel which was a subsidiary bomb dump along with several others..
The RAF Eindhoven Association was formed in 1994 by six ex-M.T. drivers who were stationed at Eindhoven in the early 1950‘s.
Les Nash (Secretary)