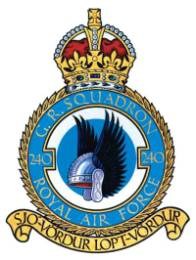 Air Sea Warfare Development Unit (ASWDU), arriving from Thorney Island on 27 May 1948. The Unit’s task was the development and testing of new maritime equipment, and in the course of this work had used a variety of aircraft types, but by the time it settled in at Ballykelly was mainly equipped with Lancasters. On 10 May 1951 ASWDU moved on to St.Mawgan, but was to return to Ballykelly in later years.
On 1 September 1958, ASWDU moved back to Ballykelly from St. Mawgan after an absence of more than seven years, bringing with it nominally three aircraft. The unit tended to chop and change its aircraft depending on what trials were being conducted, and over the next couple of years would use examples of both early marks of Shackleton. One of the most important tasks being undertaken around the time of the move was the operational evaluation of ECM equipment, known as Orange Harvest, which would become part of the phase II package of improvements.       The Ballykelly squadrons had been unique among Shackleton units in not applying hull letters to their aircraft during the period 1954-1959. However, this was about to change. Towards the end of 1959 hull letters, applied in the standard Coastal Command pattern, started to appear on the noses of aircraft of all the units based at Ballykelly. The letters were allocated on a station basis i.e. letters weren’t repeated on the base, and each unit had its own sequential allocation. These were: -

ASWDU     A and B
ASWDU hand painted the unit badge on a pre sprayed dural panel and rivetted onto the nose just forward of the captain’s window of their two aircraft.

By 1962, coloured spinners were also introduced, this period being the most colourful in terms of squadron marking at Ballykelly. Squadron allocation was as follows:-

As already mentioned, ASWDU had returned to Ballykelly in September 1958, occupying buildings and two dispersal pans in the centre of the airfield near the southern end of the disused runway. The unit was different from the others at Ballykelly and worked very hard at trying to maintain those differences. First of all, it reported directly to Coastal Command Headquarters at Northwood and not to 18 Group like the operational squadrons. This meant that it was a lodger unit and could operate in relative isolation from the rest of the station – no orderly duties, no SAR requirement, and for the erks no Gale and Crash Crew duty, a dreadful week long stint which included turning aircraft into the wind at all hours of the day and night. The unit could also find that it had to be unavoidably away at times of great upheaval, such as the presentation of squadron standards by Princess Margaret!

With two aircraft of its own, the unit comprised six or seven pilots and the same number of navigators. The numbers of signallers/AEOps were probably less than in an equivalent operational crew. All aircrew were probably a bit older than average and most highly experienced, all the pilots generally being qualified crew captains. Much time was spent away from base in the course of trials work, Malta and Bodo being popular for hot and cold trials work respectively. Close ties through regular visits were maintained with equivalent organisations in the US Navy, VX-1 at NAS Key West, and in the RCAF, the Maritime Proving and Evaluation Unit at Summerside. Indeed, more often than not, aircrew from these units were on exchange posting with ASWDU, and vice versa.

Because of its relative isolation from other units on the station, a number of extra-curricular activities are reported to have sprung up at various times during the unit’s existence, including rabbit breeding, cattle dealing and car re-spraying to name but a few!  Also, it always seemed necessary to do a navex to Gibraltar just before Christmas so as to replenish spirits stocks, although no doubt the other squadrons on t