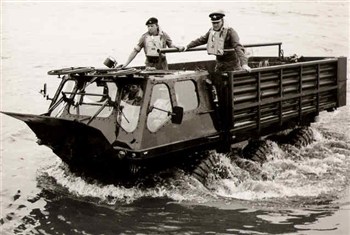 4 Armoured Division Transport Regiment RCT comprised three working squadrons, 6,11 and 21 Transport Squadrons RCT and the usual regimental HQ.11 and 33 Sqns. each supported one of the two brigades of the 4th Division, whilst 6 was an Artillery Support squadron.It is mainly used for the transport of air defence ammunition, including Rapier. "Task vehicles" were the 4 ton Bedford RL, the 10 ton AEC Mk I and the HMLC (High Mobility Load Carrier) Stalwart. CALM (Crane Attachment Lorry Mounted) were fitted to every 4th vehicle and many ‘Eager Beaver’ FLT (Fork Lift Trucks) were also held. All this MHE (Mechanical Handling Equipment) was to speed the transfer of palletised ammunition, which in war is the chief C Sups (Combat Supplies) commodity carried.