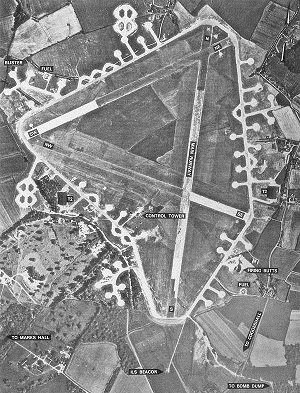 The airfield was built to the standard Class A bomber station with a 6.000ft main runway aligned 01-19 and two auxiliaries of 4,200ft aligned 07-25 and 12-30. Like other airfields of the same period, it was originally laid out with 36 pan type hardstandings but, after Earls Colne was allocated for USAAF use on 4 June 1942, an additional 16 loop hardstandings were added, one pan being eliminated in the process. Two dispersed T2 hangars and technical site buildings were erected and accommodation for 2,570 persons was provided on seven dispersed domestic sites.

During construction, an American B-17F (41-24352) of the 301st Bomb Group from RAF Chelveston made an emergency landing at the unfinished field. Earls Colne was opened in August 1942 and for the first year it was operated by No. 3 Group Bomber Command of the Royal Air Force. Apart from temporary use by F-5 Lightning photographic aircraft as a forward base, and emergency landings by a variety of types returning from operations, Earls Colne remained vacant.