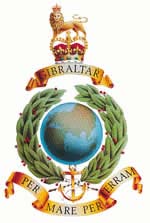 The Royal Marines Band Service is a unique musical blend of versatility, talent and traditions, on top of which is has an important medical and military role as part of a fighting force.  There motto Per Mare Per Terram (By Sea by Land) (Latin)

Musicians have existed within the Armed forces for many years but in 1767 Royal Marines Divisional Bands were formed at Chatham, Plymouth, Portsmouth and Deal.  The development of music in the Royal Marines is linked to British military Bands.  The beat of the drum enabled columns of marching men to keep regular step.  The drum was the method of giving signals on the Battlefield or in camp.  Many years ago the drummer’s rhythm would notify the soldiers’ the changing watches or beat the men to quarters.  In the six companies of the Duke of York and Albany's Regiment of Foot - the forerunners of the Royal Marines - which were raised in 1664 - the Colour and the Drum provided a rallying point in close battle. This is why even today it is the drums and bugles of the Royal Marines Buglers Branch which lead the band on parade.

Now the Royal Marines Band Service is immaculately turned out ranks of white helmets and blue uniforms, playing and marching in perfect time behind the magnificent drummers and the Drum Major - each of the bands which make up the Service has to perform as an orchestra and a dance band as well as a military band.  The Branch has its own distinct identity. It has a different uniform - buglers wear a thin red stripe down their trousers as opposed to the broad stripe worn by musicians. Their repertoire covers every category of music. They can provide anything from full orchestra down to jazz, pop and folk groups and always to the highest standard.

Today, all Royal Marines Bands are required to provide every imaginable musical ensemble including orchestras and dance bands. To achieve this, most musicians, except solo specialists, are required to attain an acceptable standard on both a string and a wind instrument.  As a result of this special amalgam of expertise, Royal Marines musicians are regarded as one of the most versatile in the military musical world.

The Corps of Drums receive an equally thorough training and pride themselves on maintaining the highest standards of drill, bugling and drumming. Their glittering presence at the front of all Royal Marines Bands on the march gives the bands a visual impact that is second to none.

In addition to making music the Royal Marines Musicians and Buglers are trained in their military operational roles.  They fought in WWII and involved in both the Falklands conflict and Operation Granby as casualty handlers on various hospital ships.  Also they have been involved in being deployed to Kosovo during Operation Agricola, during the fireman’s strike in 2002 being deployed to various Temporary Service Fire Stations.  Further 26 ranks deployed providing casualty handles in Operation Telic (Gulf War 2).  Another 38 deployed to Afghanistan again in 2008/9 with 3 Commando Brigade as ambulance and general duties drivers. Royal Marines Bands continue to fly the flag abroad with many prestigious engagements undertaken including 60th Anniversary of D-Day, Gibraltar, the USA, Europe and Australia.

After the outbreak of World War II, 225 musicians and buglers had been killed in action which was a quarter of their strength at the time and the highest percentage of losses of any branch of any service, after bomber command. After the outbreak the Royal Marine Band moved to Malvern, then it divided with the junior Wing moving to the /Isle of Man and the Senior Wing to Scarborough before reuniting at Burford in 1946.