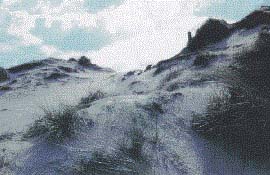 Theddlethorpe is a village in the county of Lincolnshire, England. Situated approximately four miles north of Mablethorpe and on the coast of the North Sea.
The National Grid plc owned Theddlethorpe Gas Terminal processes natural gas extracted from beneath the North Sea for use in the UK.

RAF Theddlethorpe was a bombing and gunnery range for RAF Manby with a small emergency landing ground. It was closed in the 1970s due to its proximity to a natural gas terminal. It was the scene of early 20 mm air cannon trials.