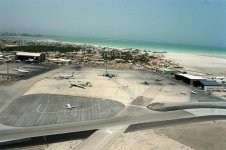 As of March 2000, RAF aircraft based at Bahrain is one VC-10 airborne tanker, crewed permanently by 101 Squadron, RAF Brize Norton. Total detachment strength is 36 personnel. The role of the tanker is to support Tornado F Mk 3 operations from PSAB, to allow sufficient flying time within Iraqi airspace to escort coalition patrols. VC-10 also supports US Naval Aircraft, both carrier and shore-based, which use the same air-to-air refuelling system. The possible move of military assets from Muharraq to Sheik Isa Airbase, a military airbase at the south end of Bahrain, will not take place in short to medium term. Development of Sheik Isa Airbase to standard required for large aircraft operations will take up to three years.