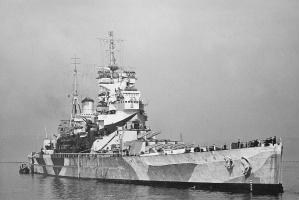 1944 H.M.S.HOWE WASTHE HEAVIEST SHIP TO TRAVERSE THE sUEZ CANAL.CAPTAIN H.W.U.MC.CALL. D.S.O. SAW US THROUGH SAFELY. SQUADIES ON THE BANK SHOUTED ENCOURAGING COMMENTS SUCH AS "YOUR DRIVER IS P.....D & YOUN ARE GOING THE WRONG WAY". hAPPY DAYS!!

I joined the navy as a boy Seaman in1943. Joined H.M.S.HOWE 1944. My only claim to fame is that I was appointed to serve as one of the Gash Chute captains. An odorous but necessary job. I remember attacking Japanese supply depots in Sumatra,along with K.G.V.& various carriers. We bombarded places like Padang & sigli. we were very "impressed" when we learned that we had successfuly destroyed a Cement factory.!!!
In the early days our gunnery Officer was Lt. Cdr.Lefanu."OLE GINGE" who later became the Admiral responsible for cutting out the Rum ration. Any way he was a very good gunnery officer.!!