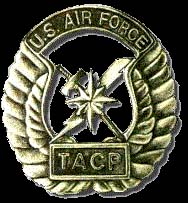 Only a select few wear the Black Beret that symbolizes the Tactical Air Control Party (TACP). The Air Force specialists are assigned to Army combat maneuver units around the world. On a battlefield, they form a tactical air control party team that plans, requests and directs air strikes against enemy targets in close proximity to friendly forces. A TACP is generally a two-airman team, working in an Army ground unit and directing close air support firepower toward enemy targets on the ground.

Tactical Air Command and Control Specialists are part of a team called a Tactical Air Control Party (TACP). The mission is to advise US Army combat commanders on the use of Air Force air power. One example of air power is a fighter aircraft attacking targets close to friendly troops. This is Close Air Support and is a very important part of the TACP mission. It is the TACP’s job to control the fighters and to make sure they attack the correct target. This unique mission requires operating on the battlefield. TACPs communicate with other tactical air and ground units by use of state-of-the-art radios, while mirroring the maneuver capabilities of our Army counterparts. Whether it’s parachuting out of an airplane from 1000 feet with the 82nd Airborne Division, engaging in a tank assault with the 1st Armored Division, or operating deep behind enemy lines with the 75th Ranger Regiment, the TACP mission is the same…PUTTING BOMBS ON TARGET!