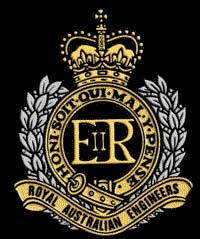 The Royal Australian Engineers (RAE) is a Corps of the Australian Army (although the word corps does not appear in their name or on their badge). The Engineer Corps is ranked 4th in seniority of the Corps, behind the Staff Cadets, Armoured and Artillery Corps. The Corps was formed by the amalgamation of the various engineer corps of the States and territories of Australia.

The motto of the Royal Australian Engineers is Ubique (Everywhere), a motto shared with RAE’s parent corps, the Royal Engineers. This motto was bestowed by King William IV in 1832 in recognition that both Sappers and Gunners where not entitled to carry Regimental Colours and typically served as small detachments instead of a whole unit. The current Engineer Hat badge features a leather garter adorned with a crown and the motto Honi soit qui mal y pense (Evil be to him who evil thinks), mirroring the motto of the Order of the Garter. This honor was awarded to the RAE in 1947 for their efforts during World War II. The original motto of the RAE, adopted at Federation was Facimus et Frangimus (We make and we break) and appeared on the engineer hat badge up until 1947 when it was replaced by Honi soit qui mal y pense. It now only appears on the Corps Cipher.

The Engineers also adopted the Royal Engineers practice of calling their private soldiers "Sappers", in recognition of the fact that the very earliest engineers had been primarily concerned with driving saps (tunnels) both towards the enemy lines, and underneath fortifications.

The Corps provides combat engineering, construction and other technical support to the Australian Defence Force. One of the objectives of the corps is mobility and counter mobility. That is providing mobility to friendly forces while denying movement to enemy forces. Engineers are able to conduct tasks including penetrating minefields, locating and disarming booby traps, purifying water and building roads and bridges. The Corps also performs the majority of the army’s demolition tasks and is trained to fight as infantry if needed.