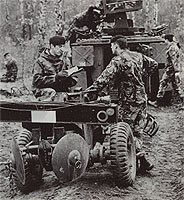 British Army on the Rhine (BAOR) was formed on 25 August 1945 from 21 Army Group. Its original function was to control the corps districts which were running the military government of the British zone of occupied Germany. After the assumption of government by civilians in 1948, it became the command formation for the British troops in Germany.

As the Cold War intensified, BAOR became more responsible for the defence of West Germany than its occupation. After the formation of the alliance known as North Atlantic Treaty Organisation (NATO) in 1949 BAOR became the primary formation controlling the British contribution to NATO. Its primary combat formation was 1 (BR) Corps. From 1952, in the event of a general war with the Soviet Union and the Warsaw Pact (formed in 1955), the commander-in-chief of the BAOR also acted as the commander of NATO’s Northern Army Group (NORTHAG) .