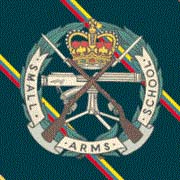 The Small Arms School Corps (SASC) is a small corps of the British Army responsible for maintaining the proficiency of the army in the use of small arms, support weapons and range management.
Prior to 1851 the majority of British soldiers were issued with Brown Bess, a smooth-bore, muzzle loading musket which had seen duty in one form or another since 1704. Lack of accuracy was compensated for by the practice of firing in volleys. Musketry, as shooting was known, was more like parade ground drill and as such was a matter for the Drill Sergeant.

More accurate Rifles did exist (indeed the principle of rifling the barrel had been known about since 1515) but took so long to reload that it was deemed unwise to have them on general issue. At this point only a couple of regiments had been equipped with rifles, notably the 60th (Royal American) Regt of Foot and the Royal Green Jackets whose special rifle drill stems from this time.

In 1849 a Frenchman, Claude-Etienne Minie, produced a rifle (named after himself) which, although still a muzzle loader had an expanding bullet that greatly reduced the time required for reloading a rifle. Re-equipment of the Army with this new weapon began in 1851.

The consequence of this was that the Army now had a weapon that was not only more accurate, but had a longer range. For the first time since the demise of the bow and arrow true marksmanship was possible. Shooting ceased to be a drill and became an art based on personal skill. Elevation, windage and ballistics now played a part.

In order to study these new problems and introduce a shooting doctrine for instruction in Rifle Shooting it was decided to form a special Corps of experts, who would also develop and improve the rifles. In March of 1853 the Army Estimates included the princely sum of ?1,000 for Lord Hardinge to form an "Establishment for the instruction of the Army in rifle and target practice."

In June of that year Colonel Hay arrived at Hythe with a small staff of officers. On the 1st August the first instructor, CSgt MacKay of the 19th Foot, was appointed. By the 15th of September a further three instructors were on strength. They were Sgt Ruston (3 Gren Gds), Sgt Lobes (2 Gren Gds) and Sgt Morris (97th Regt).

The first mention of the establishment of the School was in the Army List of 1854 when it was referred to as the School of Musketry, a name it bore until 1919 When its name was changed to the Small Arms School.

In September 1855 a Corps of Instructors was added to the establishment, consisting of 100 First Class and 100 Second Class Instructors who, as soon as they were sufficiently experienced (except for three who remained at Hythe), were distributed to Depot Battalions and Regiments as required. These men were the Corps of Instructors of Musketry, a misnomer as muskets were being withdrawn from service. The badge of the School was crossed rifles surmounted by a crown. In 1926 the School expanded to include the Machine Gun School at Netheravon. The Machine Gun Training Centres had been established in 1914 at Grantham and by the BEF in Wisques, France. This was followed on 14 Oct, 1915 by the creation of the Machine Gun Corps (MGC). Originally equipped with the Maxim, these were replaced by the Vickers shortly after formation of the MGC. In 1929 the present badge was introduced, comprising of crossed rifles and a Vickers machine gun, surmounted by a crown and surrounded by a laurel wreath. The title Small Arms School Corps came into being at this time. On the occasion of the centenary of the Corps in 1953, ’March of the Bowmen’ from the Robin Hood Suite was adopted as the Corps March.

In 1969 the School moved from Hythe to Warminster where Headquarters SASC remains to this day.