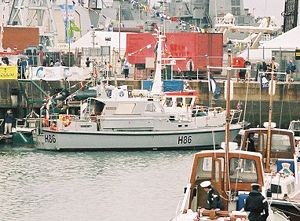 HMSML Gleaner (H86) is the smallest commissioned vessel in the Royal Navy with a ship’s company of 8 (2 officers and 6 ratings). She is based in Devonport, Plymouth. The ship prefix HMSML stands for Her Majesty’s Small Motor Launch. She is also given the more usual prefix HMS.

She is the sixth ship to bear the name Gleaner and was commissioned on 5 December 1983. Designed to conduct inshore surveys along the south coast of England she has since surveyed all around the coastline of Great Britain and visited various ports in Europe.

Gleaner is an advanced survey vessel, which uses multibeam and sidescan sonar to collect bathymetry and seabed texture data and compile an accurate and detailed picture of the seabed.