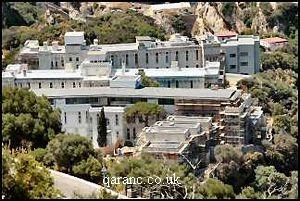 The British Military Hospital in Gibraltar was opened in 1901 to care for the British Forces based on Gibraltar and nearby sailors.

Gibraltar is nicknamed The Rock and BMH Gibraltar was nicknamed the Wedgewood Castle because of its blue colour.

The Spanish Civil War took place between 1936 to 1939. During this time BMH Gibraltar cared for troops in the conflict. This included 55 casualties from the bombed German Battleship Deutschland which had been hit by two bombs whilst lying in anchor off Ibiza.

BMH Gibraltar was already running at full capacity because the British Navy ship HMS Hunter had sustained casualties after hitting a mine whilst on neutrality patrol near Almeria in early May 1937 and BMH Gibraltar was also looking after some casualties from HM Hospital Ship Maine on the 15 May 1937. Most of these casualties were suffering from burns.

So four QAs were flown out, by flying boat because the airstrip had not yet been built, to care for the remaining German casualties. This included Colonel Gertrude Morgan who was later awarded the German Red Cross Medal on 21 November 1938 with a certificate from Adolf Hitler, a year before World War Two. At the time of receiving this award Colonel Morgan was serving at BMH Quetta.

The German Navy were so grateful for the QAIMNS for nursing their comrades that a visiting sister battleship crew gave a dance party for the QAs. The German Admiral Commanding presented the decorations to the QAs.

During the Second World War survivors from attacked convoys leaving or travelling to Malta were treated at BMH Gibraltar whilst their ships were repaired in the Naval Repairs Yards. The twelve nursing sisters of the QAIMNS (Queen Alexandra’s Imperial Military Nursing Service) were the few women on the island when the British families were evacuated in 1939 and Gibraltese women were evacuated to either Great Britain or Morocco (cited in Quiet Heroines: Nurses of the Second World War) by Brenda McBryde.

In between the hard ward duties caring for wounded sailors the QA’s enjoyed the hospitality aboard docked ships of the H Fleet like the Ark Royal. The sight of QA’s playing cards, dancing or playing deck tennis was so common that the Captain of the ship considered the QA sisters part of his team. Sadly the sisters were to witness the Ark Royal being destroyed after a run to Malta when they were watching their loved ship from a hill on Gibraltar. They rushed back to BMH Gibraltar to prepare for casualties.

The most common injury that the QA’s treated was burns, made more difficult to treat because this was at a time when penicillin was not yet discovered. Brenda McBryde describes a unique way that Sister Zena Potter helped the brave sailors cope with the pain of dressing removal when a cargo of champagne had been saved from a sunken Italian ship. The burns patient would be given a glass of champagne before the dressing was removed and then another once completed! Read more about nursing during the Second World War at BMH Gibraltar in in Quiet Heroines: Nurses of the Second World War

As WWII progressed a second hospital was built in Gibraltar deep inside the Rock in case the above ground hospital was destroyed by an air raid or Gibraltar was invaded via nearby Spain. Though the Spanish were neutral there was a fear that German or Italian troops would overrun Spain or be given access to the country

A team of Canadian Engineers tunnelled into The Rock and created a cavern that was warmed by electric fires and filled with beds and medical and nursing equipment. The engineers had even included flushing toilets and a fully equipped operating theatre. Water was collected which had dropped from the rocks and filtered. This theatre was said to have been of better quality to the one within BMH Gibraltar because it had been equipped by the American Lend_Lease (Quiet Heroines: Nurses of the Second World War). Home comforts for the QA’s and other hospital staff included a<