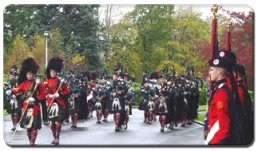 Queen Victoria School can trace its history back to the turn of the century when the idea was first mooted of a school to commemorate those Scottish soldiers and sailors who fell in South Africa during the Boer Wars.

The proposal was warmly received by Queen Victoria herself, and upon her death the following year, it was resolved that the School should serve the dual purpose of commemorating the dead servicemen as well as being a living memorial to the late Empress. To this end money was raised in a national effort which captivated the imagination of the Scottish public. For example, every Serviceman donated a day’s pay, and an appeal for contributions from the Scottish workforce received a generous response. Work began in earnest, and Queen Victoria School was officially opened on 28 September 1908 by His Majesty King Edward VII.

While remaining true to the ideals which lie at the heart of the school, Queen Victoria School has seen many changes over the years. Perhaps the biggest change took place in 1996 when the school became fully coeducational.

Further history was made in 1999 when Vicki Harris became the first female Senior Monitor in the school’s long history. It didn’t take long for this to be repeated though, with Lindsey Farquharson becoming the second female Monitor in 2001/2002.