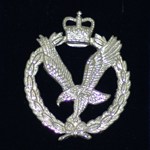 History of the AAC :

The British Army first took to the sky during the 19th century with the use of observation balloons. In 1911 the Air Battalion of the Royal Engineers was the first heavier-than-air British military unit. The following year, the Battalion was expanded into the Military Wing of the Royal Flying Corps which saw action throughout most of the First World War until 1 April 1918 when it was merged with the Royal Naval Air Service to form the Royal Air Force.

Between the wars, the Army used RAF co-operation squadrons, though a true army presence did not occur until the Second World War.

At the beginning of the Second World War, Royal Artillery officers, with the assistance of RAF technicians, flew Auster observation aircraft under RAF-owned Air Observation Post (AOP) Squadrons. Twelve such squadrons were raised—three of which belonged to the RCAF — and each performed vital duties in a wide array of missions in many theatres.

Early in the war, Winston Churchill, Prime Minister of the United Kingdom, announced the establishment of a new branch of army aviation, the Army Air Corps, formed in 1942. The corps initially comprised the Glider Pilot Regiment and the Parachute Battalions (subsequently the Parachute Regiment), and the Air Observation Post Squadrons. In 1944, the re-formed SAS Regiment was added to the Corps.

One of their most successful exploits during the war was the attack on Pegasus Bridge, which occurred on 6 June 1944, prior to the landings on Normandy. Once the three gliders landed, some roughly which incurred casualties, the pilots joined the glider-borne troops (Ox’s & Bucks Light Infantry) to act as infantry. The Bridge was taken within ten minutes of the battle commencing and the men there withheld numerous attempts by the Germans to re-capture the location. They were soon reinforced and relieved by soldiers from Lord Lovat’s 1 Special Service Brigade, famously led by piper Bill Millin. It was subsequently further reinforced by units of the British 3rd Division.

The AAC was broken up in 1949, with the SAS returning to its independent status, while the Parachute Regiment and Glider Pilot Regiment came under the umbrella of the Glider Pilot and Parachute Corps. The pilots who had once flown the gliders soon had to transfer to flying powered aircraft, becoming part of the Air Observation Post Squadrons.

From 1970, nearly every army brigade had at least one Aviation Squadron that usually numbered twelve aircraft. The main rotor aircraft during the 1970s were the Scout and Sioux general purpose helicopters. Their power though was soon bolstered by the introduction of the Westland Lynx helicopter in 1977 as well as the unarmed Gazelle. A further boost in the Army Air Corps’ capability came in the form of the Apache Mk 1 attack helicopter. In 2006, British Apaches deployed to Afghanistan as part of the NATO International Security Assistance Force. In July 2007 an order was placed for 4 Beechcraft King Air 350s for use in the surveillance role in Afghanistan, the type being much more capable than the Islanders currently used.

I was posted in jan 65 to HQ ARMY AVIATION HQ BRITISH LAND FORCES BORNEO LABUAN . CO was LT COL PE COLLINS RA . I was his driver / radio op . Only a small unit but a great bunch of lads . Best 2yrs of my time in the army .