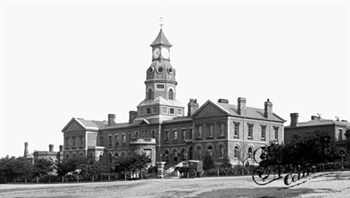 The Cambridge Military Hospital (CMH) was the fifth military hospital built in Aldershot. The other four are described at the end of this article.

The CMH was built by Messrs Martin Wells and Co. of Aldershot. The building costs were approximately ?45,758.

The first patients admitted to the CMH were on Friday 18 July 1879. They either walked or were taken by cart ambulance from the Connaught Hospital.

The hospital was built on a hill because current clinical thinking at the time thought that the wind would sweep away any infection and clean the air.

The hospital soon became a fully functioning hospital and was the first in the UK to receive battle casualties directly from the front of World War One.