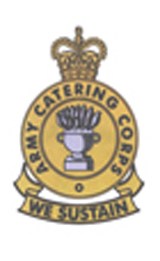 The Army Catering Corps was a corps of the British Army, responsible for the feeding of all Army units. It was originally formed in March 1941 as part of the Royal Army Service Corps, and became a corps in its own right in 1965. In 1993, as part of the Options for Change defence review, it was amalgamated into the Royal Logistic Corps.

MINDEN , GERMANY, WORKING IN THE COOK HOUSE AS THE CAMP BUTCHER, I WAS IN TOWN WITH A PAL FROM THE REME, WHEN THE POISEN DWARFS RIOTED AND WRECKED THE TOWN. SORRY I SHOULD SAY THE CAMS , BUT THEY WERE ONLY YOUNG KIDS, AND THEY DID END UP GETTING A BATTERING FROM THE M.P.,S I THINK A FEW CAM,S ENDED UP IN THE RIVER WESER.
THE TIME WE WENT TO BELSON-BERGEN CONSETRATION CAMP 1960, A VERY SAD MEMORY.

Being Best Man at Mick Parry’s wedding.
Bunking off with Russ on our first week-end of basic training.

my memories are nothing particular except of the good times I spent with the boys of squad 8 at St Omer barracks in 1950. The photo that i down loaded shows a right bunch of charlies, i can recall most of the names, it would be nice to hear from someone in the photo and perhaps fill in the blanks.