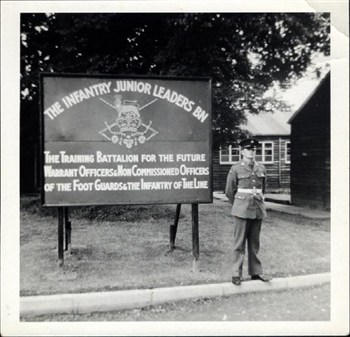 The Battalion was organised like a normal military unit
with special attention being given to educational instruction
and the encouragement of sport ,hobbies and other outdoor pursuits
to promote a healthy body and mind. They would hopefully go on to become
the future  Warrant Officers and Senior NCO’S of the British Army.

Their daily routine was morning parade with either weapon training,
PT or Drill, followed by half a days educational instruction.

I joined in april 68 as a 15yr old we were placed into different blocks my was Acoy light infantry and scottish reg we had a big sgt maj devon an dorset a good man. I left in dec 69 to join my reg 3li to which i spent 9 years.

On the 4th August 1969 I enlisted in the Army at London road in Liverpool my first selection after passing a 4 day assesment to join the REME but the waiting list was 18 months so I choose my second option even when the recruitment officer wanted me to join the Royal Engineers and sign up for Loyals regiment(NL) being only just 15 years old I was given a choice for training at Junior Infantymans battlion in Shorncliffe Kent or at IJLB Oswestry and Shorncliffe IJLB had just opened in 1967 as the JIB.
On 8th september 1969 I arrived at JIB in Kent and became a junior soldier of Loyals Regiment even those I have worn the Loyals cap since was 11 years old in the cadets I still did not get serve has an adult with Loyals regiment has came be 1QLR in 1970 however My training there served me well and made many friends too and great memories of a wonderful place.
The junior Infantrymans battlion was a great prepartion stage for adult service with your Regiment if you worked hard,education was bonus and you made fiends that left an everylasting of bond.
My time at JIB Shorncliffe was an important part of training to a soldier and these Battalions gone but the memories have not even into your adult sevice.
After my passing out parade in the summer of 1971 we made our fond fare wells and many did meet again during our adult service with our regiments.
I joined my Regiment 4 months after passing out at Shorncliffe and Oswestry soldiers going to 1st Queens Lancashire Regiment were posted to work at the Kings Division Depot first, 4 months later we finally we arrived at the Regiment.
I serve with the Regiment from 1971 to 1979 and medically dischared both were wonderful years, if I had to recomment such I would yes JIB and JLB training was the finest preparation to go in any Regiment or Corps in the Army.