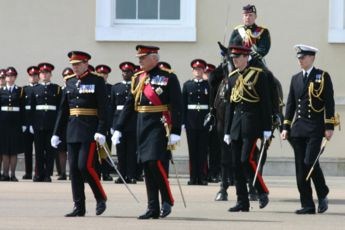 The Chief of the Defence Staff (CDS) is the professional head of the British Armed Forces. The post was created in 1956 to reflect the new conceptions of joint operations that had come to the fore in World War II. Prior to the creation of the post, one of the three members of the Chiefs of Staff Committee was appointed chairman.

From its creation up until the mid-1990s, the Chief of the Defence Staff was appointed to the highest rank in the branch of the British armed forces to which he belonged (equivalent to a US "five-star" rank) being an Admiral of the Fleet, a Field Marshal or Marshal of the Royal Air Force. However, with defence cuts, having such a high ranking officer was seen as too expensive, and too prestigious for the post-Cold War size of the British Armed Forces. Consequently, since then the Chief of the Defence Staff has not been promoted to five-star level and has retained the lower ("four-star") rank of (Admiral, General or Air Chief Marshal). Part of the reasoning is that no new Field Marshals are to be routinely appointed in peacetime.

The current Chief of the Defence Staff is Air Chief Marshal Sir Jock Stirrup who succeeded General Sir Michael Walker on 28 April 2006. It is traditional for the holder of the post of CDS to be from a different service to his predecessor (this has only been broken once, when General Guthrie succeeded Field Marshal Inge) and also a different service from his deputy, the Vice-Chief of the Defence Staff (VCDS). The current VCDS is General Sir Timothy Granville-Chapman. This possibly casts doubt on an allegation in the Sunday Times in June 2008 that Sir Richard Dannatt’s expected routine promotion had been personally blocked by Prime Minister Gordon Brown "because of his repeated calls for better pay and conditions for servicemen.