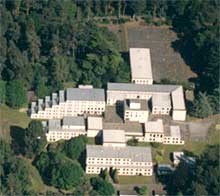 Princess Margaret opened the QARANC new Depot and Training Centre on 17 October 1967. The centre was built on the site of the Royal Pavilion.

The QARANC Depot was designed to house 250 people and built at a cost of £700,000. The buildings are six-storeys high and grouped around the kitchen and stores.