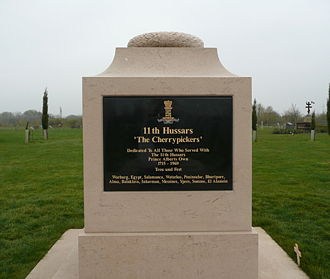 Their career during the 18th Century included service in the Seven Years’ War when they took part in the charge at Warburg.

In 1840, the regiment was named for Prince Albert, Queen Victoria’s consort, who later became the regiment’s Colonel.

During the Napoleonic Wars battle-honours were received for Salamanca, Peninsular and Waterloo. The regiment’s nickname, the "Cherry Pickers", came from an incident during the Peninsular War, in which the 11th Hussars were attacked while raiding an orchard at San Martin de Trebejo in Spain. They were distinguished thereafter by their cherry coloured trousers, unique among British regiments and worn in all styles of uniform except battledress.

The 11th Hussars charged with the Light Brigade, which was commanded by their former Colonel, Lord Cardigan, at Balaklava during the Crimean War.

In 1928, the 11th Hussars became the first British regiment to become mechanized. In 1936, they became involved in suppressing the Arab revolt in the British Mandate of Palestine.
In 1940, the 11th was located in Egypt when Italy declared war on Britain and France. It was part of the "Divisional Troops" of the 7th Armoured Division (known as the "Desert Rats"). Equipped with obsolete Rolls Royce and Morris armored cars, the unit immediately began to conduct various raids against Italian positions during the Western Desert Campaign. The Hussars captured Fort Capuzzo and, in an ambush east of Bardia, captured General Lastucci, the Engineer-in-Chief of the Italian Tenth Army.

In September 1940, when the Italian invasion of Egypt was launched, the 11th Hussars were part of the British covering force.

The 11th Hussars took part in the British counterattack called Operation Compass that was launched against the Italian forces in Egypt and then Libya. The unit was part of an ad hoc combat unit called "Combe Force" that cut off the retreating Tenth Army near Beda Fomm. Lieutenant-Colonel John Combe was the commander and namesake of Combe Force. The Italians were unable to break through the defensive positions established by Combe Force and surrendered en masse as the 6th Australian Division closed in on them from their rear.

Prior to the Normandy campaign, the 11th Hussars were removed from the Division and assigned as a Corps-level unit in accordance with Field Marshal Bernard Montgomery’s view that all armoured car regiments would be assigned to Corps, not Divisions. Later in the European campaign, the Regiment reverted back to the 7th Armoured Division.