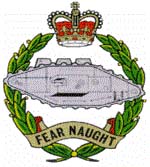 The corps has had more regiments over time going up as far as the 8th RTR.

In 1923 it was officially named Royal (making it the Royal Tank Corps) by Colonel-in-Chief King George V. It was at this time that the motto Fear Naught, the black beret and the unit badge were adopted. The word Corps was replaced in 1939 with Regiment to give the unit its current name, the Royal Tank Regiment.

In 1920, twelve Armoured Car Companies were set up as part of the Tank Corps, absorbing units from the Machine Gun Corps; eight were later converted into independent Light Tank Companies. All disbanded before the outbreak of the Second World War.

With the preparations for war in the late 1930s a further two regular battalions were formed; the 7th in 1937 and the 8th in 1938. The 40th, 41st, 42nd, 43rd, 44th & 45th battalions were raised in 1938, being converted from Territorial Army infantry battalions, the 46th, 47th, 48th, 49th, 50th and 51st were likewise activated and converted in 1939. The twelve Yeomanry Armoured Car Companies of the RTR were all activated and transferred to the Royal Armoured Corps.

The creation of the Royal Tank Regiment was due to the invention of the Tank during the First World War.

The official motto of the Royal Tank Regiment is Fear Naught which is inscribed on the RTR cap badge.

I was driving for the SQMS Sgt Milnes .We were tail end charlie in a convoy and had to keep an eye on a bulldozer at the back, as we got left behind by the main convoy i lost my bearings and drove over a near vertical drop. so far over that we could not reverse as the trailer brake was locked on, at the bottom of the hill we saw the rest of the convoy moving along the valley floor . I had no choice but to let the landrover go on down the hill in 1st gear. Much to the horror of Sgt milnes and the rest of the convoy . The dozor driver got the shock of his life when he followed us down.

Drove a Mk5 Centution for trials on Salisbury Plain .Ran out of petrol on a run. had to go to the long range snippers with jerrycans to fill up. Then lost a track. Told some Paddy that the morris 8 side valve engine used as the aux geny was the main engine,he rushed off to tell his mates.

Did my Centurion Driving training at Bovi. Our Cent' had no starter motor so had to bump start it. got to the top of the knifedge for the first time and stalled it. Balanced nicely on the top,the rest of the crew had to stand on the back deck to try and rock us off the top to restart the engine. Watched by a group of civvies parked on the side of the road.

Would like to hear from Stan Marshall ex 3rd R.T.R. used to live in Woolwich and married to Flo with a son named Kevin, also Wally Wade ex 3rd RTR and from Dorset I think.
In my photo are the gang from "HQ" Field records in Bad Oeynhausen about 1954. Back row: Dicky. then myself, can’t remember next one, Leo Waite, can’t remember the next two. Front row: Bob Brandon Brummy), Jim and Rita Escott, it was their wedding party and Dickie’s Frau. Jimmy Jeal should have been there but was on leave. would love to hear from them