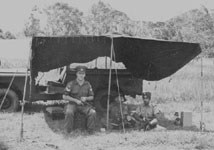 When in June 1948 three British rubber plantation managers were murdered a state of emergency was declared and a twelve year anti-terrorist campaign by the British began. The terrorists were quickly isolated from the rest of the population by the British ’Hearts and Minds’ policy, which allowed villagers to be rehoused in ’New Villages’ with modern facilities and conveniences. The Terrorists, lacking popular support, were pushed into the Jungle and the police and army strove to fight them on their own ground. The fighting was infrequent but fast and furious, and the Army’ tactics changed accordingly, it quickly being realised that the Gurkha made an ideal jungle soldier. Against this background the 17th Gurkha Infantry Division was formed, and the Gurkha Signals rapidly assumed responsibility for all communications to the various Brigades within that division.
Following closely in the footsteps of 48 Gurkha Infantry Brigade Signal Squadron came K (King) Troop raised in November 1951 as the brigade signal squadron for 63 Brigade in Seremban. The next year in November L (Love) Troop was formed to support 99 Brigade in Johore Bahru and in December the squadron at 48 Brigade was renamed J (Jig) Troop so that the three troops could comprise 3 Squadron 17 Gurkha Division Signal Regiment. An independent squadron was raised in December of 1952 in Kluang to provide communications for 26 Gurkha Brigade and 1 Squadron the divisional headquarters squadron formed in Kuala Lumpur in April 1953 provided the last component for the formation of the regiment. The Regiment was officially constituted on the 16th October 1953 as 17 Gurkha Division Signal Regiment commanded by Major L H M Gregory.