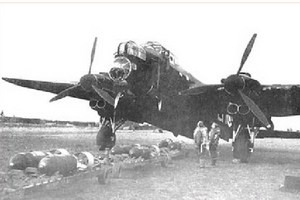 RAF Station Winthorpe, No. 51 Base, was opened as a satellite station for RAF Swinderby. Early operations were mainly centred on the Polish squadrons 300 and 301, who usually flew Fairey Battles, operating from Winthorpe when Swinderby was water logged.
Control of Winthorpe was passed to RAF Ossington and was used for a period as a Relief Landing Ground by No. 14 Pilots Advanced Flying Unit (PAFU) who had arrived at Ossington in January 1942.
The Station was selected to investigate improvements to bombing techniques. A Bombing Officer was appointed to each flight and an all round effort from Flying Staff, Armament and Electrical Officers helped with the eventual achievement of worthwhile improvements.
Winthorpe became part of Maintenance Command and in February 1953 the Central Servicing Development Establishment arrived from RAF Wittering, but with no aircraft.
Winthorpe became inactive. Although the accommodation quarters from the Station continued in RAF use until the 1960s they were eventually incorporated into the village of Coddington.