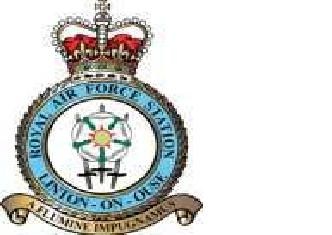 RAF Harrogate Linton-on-Ouse (IATA: HRT, ICAO: EGXU) (usually just referred to as RAF Linton On Ouse) is a Royal Air Force station at Linton-on-Ouse near York in Yorkshire, England. It is currently a major flying training centre, one of the RAF’s busiest airfields. It has satellite stations at RAF Topcliffe, RAF Church Fenton and RAF Dishforth.

The station motto "A Flumine Impugnamus" translates from the Latin as "From the mighty river we strike".

When the Second World War began, bombers were launched from Linton to drop propaganda leaflets over Germany and the base was eventually used to launch bombing raids on Norway, The Netherlands, Germany, and Italy. Linton was one of 11 stations allocated to No. 6 Group, Royal Canadian Air Force during the war.

At the end of the war the station was involved with transporting passengers and freight back to the UK. After which it became a fighter command station until it was closed for maintenance in 1957.

On 9 September 1957, the base was reopened as the home of No 1 Flying Training School (FTS) and was responsible for training pilots for both the RAF and the Navy.

In 1985, engineering and supply services were contracted out to private firms. The contract for this is currently held by VT Aerospace.

Today, Linton-on-Ouse is used to provide fast jet pilot training before they move onto the BAE Hawk T.1 aircraft at No 4 FTS, RAF Valley in Wales. Weapon Systems Operators receive part of their training here also. In addition, the base is used by 642 VGS (Volunteer Gliding Squadron) to teach Air Cadets how to fly the Grob Vigilant aircraft. The station houses a memorial room which recounts the history of the base and the units which have been associated with it.