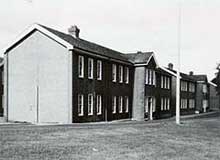 These barracks were built for companies of the Royal Army Service Corps units in Aldershot, to accommodate for the growth of the size of the Corps. They comprise of two storey barrack blocks, each built to accommodate 60 men and two non commissioned officers.