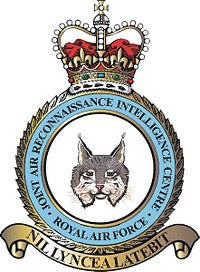 Both units then became the Photographic Interpretation Unit (PIU) by 11 July 1940 and through a series of War Ministry reorganisations later became the Central Interpretation Unit (CIU) on 7 January 1941 and changed again to the Joint Air Photographic Intelligence centre (UK) JAPIC[UK] in August 1947. This also marked the formal ending of the codename MI4. Although all ’MI’ codenames have officially been abolished, those of MI5 and MI6 have endured in popular culture and usage in a way that MI4 has not done in relation to JARIC. On 17 December 1953 the unit was finally given the name of Joint Air Reconnaissance Intelligence Centre [UK] - JARIC[UK].

The JARIC Photographic Wing moved to RAF Brampton near Huntingdon in Cambridgeshire from locations at Medmenham, Wyton and the Interpretation Unit which had been located at Nuneham Park near Oxford moved in July 1957. In 1956 where they were joined by the Joint School of Photographic Interpretation (JSPI) in December.

In 1980 the (UK) was dropped from the name to reflect the closing of the Cyprus based JARIC(ME) in April 1975.

On 1 April 2000 the unit stopped functioning as an independent agency and merged with Military Survey into the Defence Geographic and Imagery Intelligence Agency (DGIA).

On the 10 October 2005 the JARIC name ceased to be an acronym to reflect the fact that its sources of imagery had shifted away from those provided by UK Air Reconnaissance platforms to be predominantly satellite imagery based. The descriptor ‘The National Imagery Exploitation Centre’ was also added to the name to better explain the role that JARIC now provides not just within the Ministry of Defence but within the wider UK intelligence community.

On 10 June 2006, DGI (as it became after de-agencification within the UK’s Defence Intelligence Service) was renamed the Intelligence Collection Group (ICG) comprising the Defence Geographic Centre (DGC) based at Feltham, Middlesex, The Joint Signals Support Organisation (JSSO), based at Digby, the Joint Aeronautical and Geographic Organisation (JAGO) based at Hermitage and JARIC-The National Imagery Exploitation Centre based at Brampton.

The head of the service is Group Captain Ian Wood OBE MA BA RAF. JARIC currently comprises around the same number of staff that it did when first established under its current title in 1953 (around 500) and is the UK’s prime provider of imagery intelligence, both to meet the demands of the Ministry of Defence and to meet the requirements of the wider intelligence community. Its role has evolved from the more traditional photographic analysis to encompass more technical intelligence disciplines such as MASINT (Measurement and Signatures Intelligence) and also GEOINT (Geospatial Intelligence).