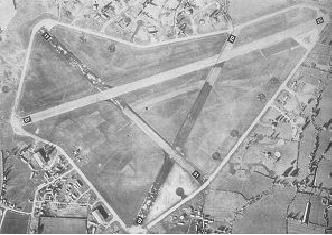 Land for Keevil airfield was requisitioned in 1941 under emergency powers with the intention of returning it to the owners when hostilities ceased. The principal contractor for the construction of the airfield was the wates Group , but a large number of specialist sub contractors were used. Many workers were drafted into the area and found accommodation in the surrounding villages, particularly Steeple Ashton and Keevil.

The airfield and its associated buildings were of a standard wartime construction. Altogether around 400 buildings and constructions of all types were erected, and accommodation, catering, workstations and services provided for a permanent staffing of 165 officers, 523 senior NCO’s and 1854 other ranks.

A highly important and unusual addition to the airfield was an aircraft final assembly hangar - still in situ - from where completed Spitfire fighter aircraft were taken to ’dispersal’ for test flying and delivery to Maintenance Units, where ancillary equipment, such as radio and armament would be fitted.