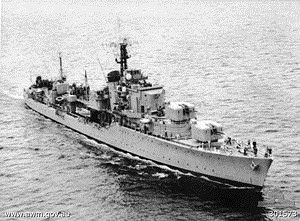 HMAS Tobruk (D37) was a Battle-class (Anzac class in the RAN) destroyer of the Royal Australian Navy (RAN). Tobruk was deployed to the Korean War twice. In 1960, she was damaged beyond economical repair by sister ship HMAS Anzac during a gunnery exercise, which led to the destroyer’s decommissioning and sale for scrap.

Tobruk was laid down by the Cockatoo Docks and Engineering Company Propriety Limited at Sydney in New South Wales on 5 August 1946 and was launched on 20 December 1947 by Mrs. W. J. F. Riordan, wife of the Minister for the Navy. Tobruk was commissioned into the RAN and commissioned at Sydney on 8 May 1950.

Tobruk completed two deployments to Korean waters during the Korean War. The first deployment lasted from October 1951 to January 1952, and consisted of six patrols. The second deployment was from June 1953 to January 1954.

In September 1960, Tobruk was performing gunnnery exercises with sister ship HMAS Anzac off Jervis Bay. A malfunction in Anzac’s gun direction equipment negated the deliberate 6 degree mis-aiming of her guns, with the resulting shell hitting Tobruk and doing enough damage to the destroyer to make repairs uneconomical. Temporary repairs were made to Tobruk in Jervis Bay before the ship limped back to Sydney. Two of Anzac’s crew were charged over the incident.

Tobruk paid off into reserve on 9 October 1960. The destroyer was sold for scrap to Fujita Salvage Company Limited of Osaka in Japan on 15 February 1972 and departed Sydney under tow on 10 April 1972.