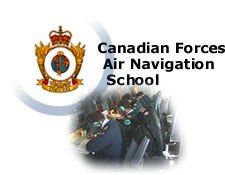 The Canadian Forces Air Navigation School (CFANS) is the basic aircrew training facility for all Canadian navigators, as well as navigators from seven other NATO and non-NATO countries. CFANS has existed in its current form in Winnipeg since 1968, but air navigator training in Canada has been anything but constant.
n August 1967, Central Flying School (CFS) and Central Navigation School (CNS) were combined to create the Central Flying and Navigation School (CFNS). CFNS shared Mawdesley Hall with the Air Navigation School, and was responsible for post-graduate training of pilots and navigators, as well as the maintenance of aircrew training standards in the Canadian Forces. A further reorganization took place in November 1968. The Director of Aerospace and Advanced Systems and his staff, which included the students of the Aerospace Systems Course (ASC), the Advanced Radio Navigators Course (ARNC), and the Navigation Instructor Course (NIC) became part of the ANS, which was renamed the Canadian Forces Air Navigation School (CFANS). The remaining staff, including the Commandant of CFNS formed the Canadian Forces Flying Training Standards Unit (CFFTSU), which fell under the direction of Training Command. CFFTSU was responsible for the quality control of all basic aircrew training in Training Command, just as CFNS had been. CFFTSU was essentially a combined pilot/navigator standards squadron, and was also responsible for Instrument Check Pilot (ICP) training, which focused on advanced instrument flying techniques. CFFTSU still exists today under the name of the Central Flying School (CFS). While the names and acronyms of schools seem to change regularly, the roles rarely do. Aircrew undergraduate training has evolved considerably, however the requirement to maintain high standards has not changed.