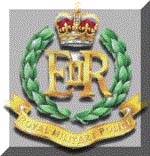 The Royal Military Police (RMP) is the branch of the British Army responsible for the policing of service personnel and providing a military police presence on service property, operations and exercises. Its members are generally known as Redcaps because they wear red-topped peaked caps or red berets. Their stable belt was red until 1992, when they were federated into the Adjutant General’s Corps and started wearing the blue and red belt adopted by the AGC. Now the RMP has reverted to the wearing of a new version of the original red belt as approved by the Army Dress Committee. Like other military police around the world, they continue to wear white webbing with barrack dress but white gaiters have not been worn since the 1960s. The regimental march of the RMP is the "The Watchtower" or "Die Wacht Turm" originally an 18th century German Army marching tune.
Principal duties of the RMP:

The provision of garrison police facilities;
Law enforcement and crime prevention; and liaison with Home Office police forces and other police forces worldwide when Army interests are involved or suspected;
Tactical military police support to the Army in all phases of military operations.
The provision of close protection worldwide to those deemed by the Ministry of Defence to warrant such.
RMP personnel are not sworn in as constables and only have police powers whilst dealing with military personnel, dependents or overseas contractors sponsored by the Army. RMP personnel do not have to be on Ministry of Defence land to exercise their authority. They also have police powers over the personnel of the other two services: the Royal Navy and the Royal Air Force. The Royal Navy Police and RAF Police also have reciprocal police powers over Army personnel.

About 6 WRAC Provost arrived in Chi November 1980 and passed out March 1981 (Squads 8008 through 8013 were all there). We were too early to join our own squad (8012) so we were the "extras" for the crime scenes at Tangmere House. It was hilarious, I don't remember how many times I was "murdered" but I had a hell of a job getting the fake blood out my hair.
My memories of training are a bunch of great people, discos in the shooting range, laughing a lot, being black and blue from the assault course and more laughter. Who can forget the CSM's "River Runs". If you were there then and remember me I would love to hear from you. Was it ever as much fun after training????

I enlisted in the Army on 9 January 1967, and did recruit and driver training at the Depot Hong Kong Military Service Corps, Lyemun Barracks, Hong Kong Island. On completion of this training, I was posted to Hong Kong Provost Company Royal Military Police. I served with the Island Detachment, Victoria Barracks, from 16 July 1967 to 7 February 1972 before moving on to other duties within the Army in Hong Kong. I enjoyed my five years with RMP, during which I reached the substantive rank of Corporal.
The RMP in Hong Kong had a wide and varied role. In the 1960s, the HK soldiers supplied to the HK Pro Coy RMP by HKMSC were employed as MT drivers. However, in order that these HK soldiers could deal with every situation within every aspect of RMP concern, in the 1970s it became mandatory for them to attend the Basic Provost Course and even the Senior Promotion Course, both of which were held at the RMP Training Centre in Chichester, UK. The knowledge and skills learned during the 16- week Basic Provost Course were invaluable, enabling HK soldiers to integrate smoothly into the HK Pro Coy and SIB RMP. They returned to the unit with the self-confidence and bearing required to deal with the demanding tasks expected of RMP NCOs.
The first HK soldiers were enrolled into the HK Pro Coy in 1949. This was a landmark in the development of the Hong Kong RMP, as it extended the unit¡¦s capabilities and enabled the RMP to communicate not just with the military, but also brought about improved and effective liaison between other policing organisations and the local community.
In 1958, the Army Guard Dog Unit Hong Kong, part of the RAVC, was rebadged RMP. Initially the unit was comparatively small but it grew rapidly in numbers as the demands on it increased, and its range of duties expanded accordingly. As its height, it numbered 120 HK soldier handlers and 80 war dogs under the command of a British OC supported by a WO1 RMP
The Dog Coy, as it was called later, played a major role in patrol operations along the border with the Chinese People¡¦s Republic, as well as by providing guard dogs for camps and military installations within the Garrison. The Dog Coy also added to its reputation by putting on displays at various open days and shows around Hong Kong, and by achieving a series of highly creditable results in the dog obedience trials held in the 1960s and 1970s. Sadly, on 1 September 1976, the Dog Coy was rebadged to the RAVC again, thus ending a near twenty years¡¦ command of the Dog Coy by the RMP.
The HK Pro Coy and SIB RMP continued with their other more traditional policing and investigating duties within Hong Kong, assisted by the Hong Kong soldiers under command, who brought not only their professionalism and local knowledge to the job but also added an oriental flavour that was unique within the RMP.

Introduction of the breathalyser to BAOR, West Germany, courtesey of the UK’s Road Safety Act 1967.

Do you remember trying to avoid the ’Rocking Horse’call out.

I was the first RMP barman in the new Plastis Pub at Aldergrove,,they were the best times in N/Ireland, met some great people , had some great nights,,,,,,,, in the pub and after the pub closed ???? I would play ELVIS all night, and converted a few people to like him ,, miss those times now..