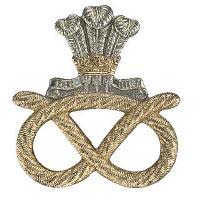 The two regiments were involved in a number of notable conflicts. These included the Zulu War, the First and Second World Wars, the Gulf War and the Iraq War.

I hope somebody can help.My mothers uncle,who named her when she was born,died 6th August 1944.He was in the Battle of Caen we think.He was Warrant Officer Class II (C.S.M.) William Charles Stanton of the South Staffordshire Regiment Unit 2/6th Bn. Service number 2651297. We just wondered if anybody knew him,and if they did,what was he like etc,or of how he may of lost his life.We are planning a trip soon to his war grave in FONTENAY-LE-PESNEL WAR CEMETERY, TESSEL. We would be very interested to know if anyone has any information,thanks.

I am looking for information about my Grandad "George Albert Nicholls" who was in the South Staffordshire Regiment/1st Worcestershire Regiment during the second world war. He fought in Africa (Palestine, Sudan, Libya) and was captured by Rommel in at Tubruk in June of 1942 and taken to a prison camp first in Italy and then to STALAG 4 DZ Germany until the end of the war.

The great time we spent in South Armagh
Time we went to the US at Fort Lewis.