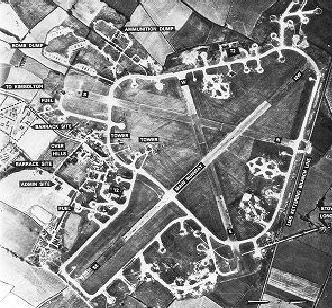 The airfield was originally built in 1941 for RAF Bomber Command, then expanded for use by American heavy bombers during 1942. Kimbolton was assigned United States Army Air Force Eighth Air Force. It was given designation USAAF Station 117.

The 91st was assigned to the 1st Combat Bombardment Wing of the 1st Bombardment Division. Its tail code was Triangle-A. Its operational B-17 Flying Fortress squadrons were: