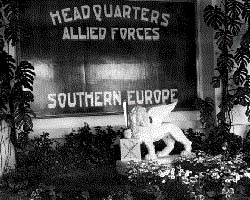 A temporary home - in an apartment building - was found in Naples, on the hill of Posillipo; and the headquarters opened on 1 September 1951. A symbol of the new Allied command was also selected, the "Lion of Saint Mark," the traditional symbol associated with the ancient Republic of Venice. At the flag dedication ceremony, later that year, Adm. Carney explained the reasons for his choice. "The insignia of the flag is that of the Lion of Saint Mark, a design old and honoured in the Mediterranean, with the design of power - holding open ’the book of peace.’ However, the Lion has a sword poised, indicating that he is willing to maintain that peace."
From the new AFSOUTH headquarters it was possible to enjoy a view of the beautiful Neapolitan landscape, but that could not compensate for the limited dimensions of the building. During the following year a suitable facility for the permanent headquarters was identified nearby: a complex originally built in the Bagnoli district of Naples to provide a home for young people in need. The facility, built in 1930’s, was occupied by the Italian War Ministry until 1942 when it was turned over to a Fascist Youth Organisation and, later, to the German troops until 1943.  The Germans were replaced by the Allies from 1943 - 1945. Between 1946 and 1951 the facility was used by the International Refugee Organisation to house displaced persons. Very little of it remained in good shape, and it took nearly two years to renovate the facilities, which belong to a foundation of the Bank of Naples. Cost for the renovation was covered approximately one-third by NATO and two- thirds by the Italian Government. Relocation of AFSOUTH to Bagnoli started in January 1953, and the new complex was officially inaugurated on 5 April 1954, while celebrating the fifth anniversary of NATO, by Admiral William M. Fechteler, who had replaced Adm. Carney in August 1953.