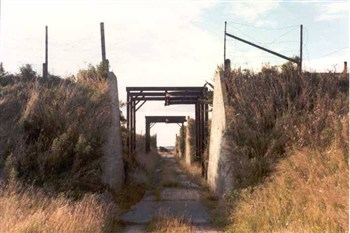 The first of these was at Wick where land adjoining the existing civil aerodrome at Hillhead farm was requisitioned for the purpose. Wick became operational at the end of September 1939. The station HQ was hastily formed in Wick on 15 September and by the end of the month 803 Squadron’s Skuas were flying fighter patrols along the north coast. The landing ground at this time was grass, which rapidly became quagmire in the winter rains, and priority was given to constructing tarmac runways.

Wick became a Sector Station in December 1939 with responsibility for aircraft movements from the borders to Shetland and the Western Isles. Initially the station was shared between Fighter and Coastal Commands, with fighter squadrons based here for the protection of Scapa Flow, but in October 1940 Fighter Sector HQ moved to Kirkwall leaving Wick solely to Coastal Command. The station remained thus until the end of the war, flying patrols over the North Sea and Atlantic Ocean and making long range meteorological and reconnaissance flights. The last squadron to leave Wick was No.316 on March 1946. After this the airfield reverted to civil operation which it remains to this day. The station buildings seem to have been constructed in the pre-war expansion period layout with all the station buildings being clustered together in a single area with the domestic side also being very close by. This presented an ideal target to a bomber which could do immense damage to this compact group of buildings with only a few bombs. Later stations, such as Castletown and Skitten, had their buildings widely dispersed and thus presented less of a target. Very few original wartime buildings survive at Wick, although two of the original four huge ’C’ type hangars are still standing, along with the original watch office or control tower. Most of the technical and administrative buildings were prefabricated wooden hutting which survived until recent years as industrial units. A big cleanup in the late 1980s saw the whole area re-developed and all these buildings were demolished to make way for new modern industrial units.

An interesting survival is the bomb and ammunition stores compound on the northern boundary. Still with their huge steel doors and protective blast walls, built as much to protect those outside from the affects of an explosion inside the store as to protect the stores from attack outside, they are a stark reminder of Wick airport’s more aggressive past.